As of November 2021, Ireland has an extremely high rate of adult vaccination of over 90%. However this does not appear to have altered the seasonal rise in cases being seen as the Winter season begins. (Mass testing of the population continues at a high level in Ireland as it does in the UK). It is now apparent that despite providing protection from disease severity, vaccines do not significantly prevent transmission in vaccinated individuals. This was not an endpoint of the trials. The continued trend in positive tests in most countries with high vaccination rates shows this quite clearly. There have also been several studies illustrating this, as detailed below. These are all observational studies rather than part of clinical trials. Note also that none of them directly measure the amount of transmission between/within groups as this is harder to do. Rather viral load as a proxy for infectiousness was measured. 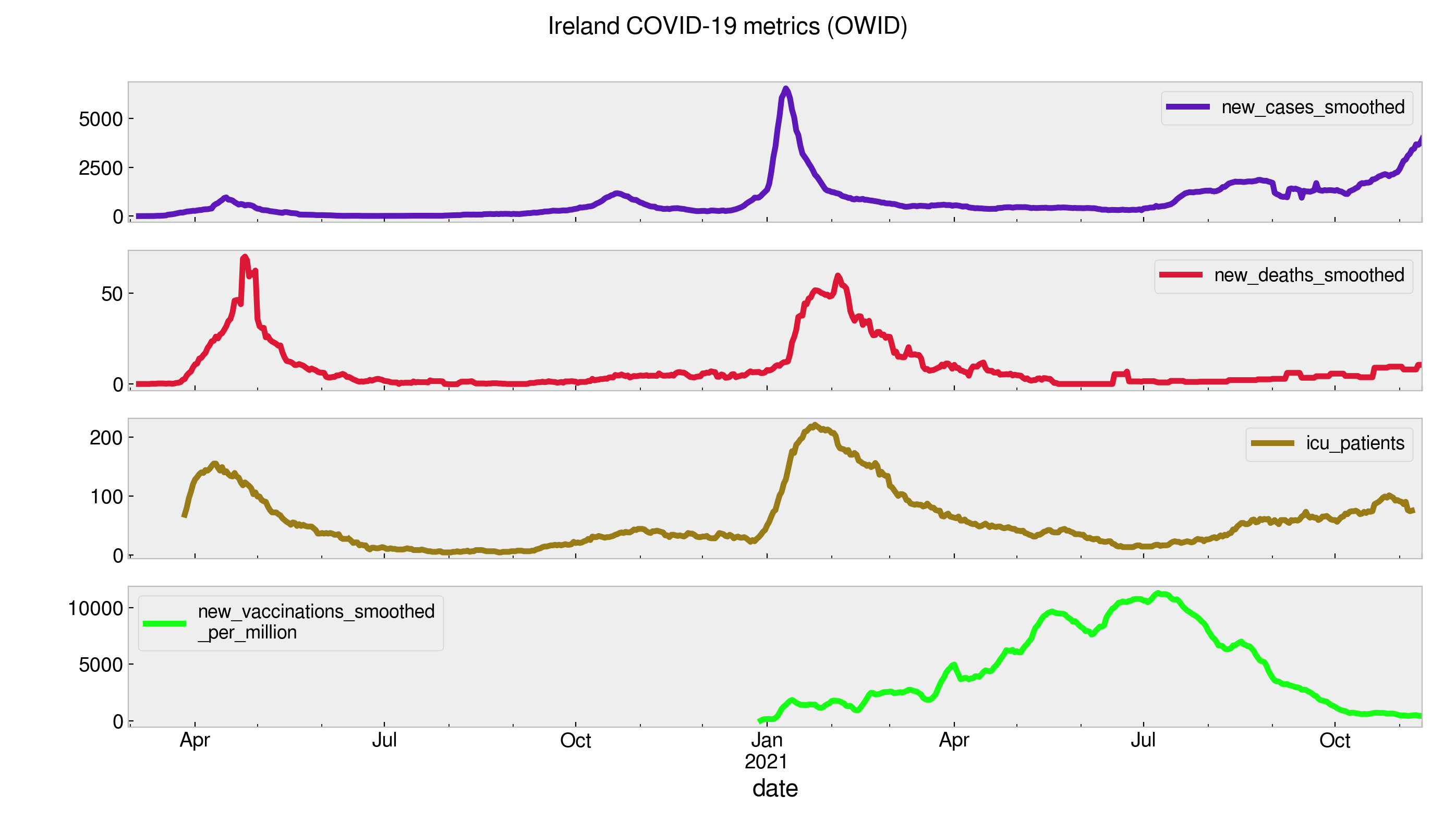 Trend in key Covid metrics for Ireland from Our World In Data.

A US study 1 was conducted in July 2021 by Madison and Dane County health department of Wisconsin and published as a pre-print at medRxiv. They used PCR to estimate the concentration of virus in nasal-fluid samples and compared Ct values for 719 people (310 vaccinated and 389 unvaccinated) that had tested positive for SAR-CoV-2. 68% vaccinated and 63% of the unvaccinated group had Ct values less than 25, a level at which infectious SARS-CoV-2 is highly possible. It was around this time that the CDC reversed its guidance on mask wearing for vaccinated people.

More recently in the UK, a study published in the Lancet 2 looked at the risk of COVID-19 transmission within households. This was done by following 205 household contacts of people with confirmed PCR positives, some of whom exhibited symptoms. 81% of these contacts had at least one vaccine dose, the remainder unvaccinated. 52/205 became positive including 31 of 126 who were doubly vaccinated (25%). For unvaccinated this rate was 38%, so slightly higher. The median length of time since vaccination was 101 days. So there may be a short period post vaccination where the susceptibility and/or infectivity are lower. The estimated peak viral load in infected individuals was the same regardless of vaccination status, although these levels dropped off more quickly in the vaccinated people. Most transmission probably happens around the peak of viral load. Note that RT-PCR is used as a proxy for infectiousness. The authors concluded that breakthrough infections in fully vaccinated people can efficiently transmit infection in the household setting.

Another study from the University of California, Davis, Genome Center has been published in medRxiv as a pre-print 3. The data came from two different testing sites in California from June to August 2021. Some were symptomatic. Breakthrough infections were defined as those in individuals after two weeks of being fully vaccinated and so excluded the partially vaccinated. They found wide ranges of viral load within both vaccinated and unvaccinated groups, but not between them. RT-PCR was used for testing. The key finding is illustrated below. The box plots show distributions of Ct values between both groups (A) and stratified by symptom status (B). Lower Ct value means higher viral load. No statistically significant differences were found in the mean Ct-values for any groups. p-values are shown above the plots. 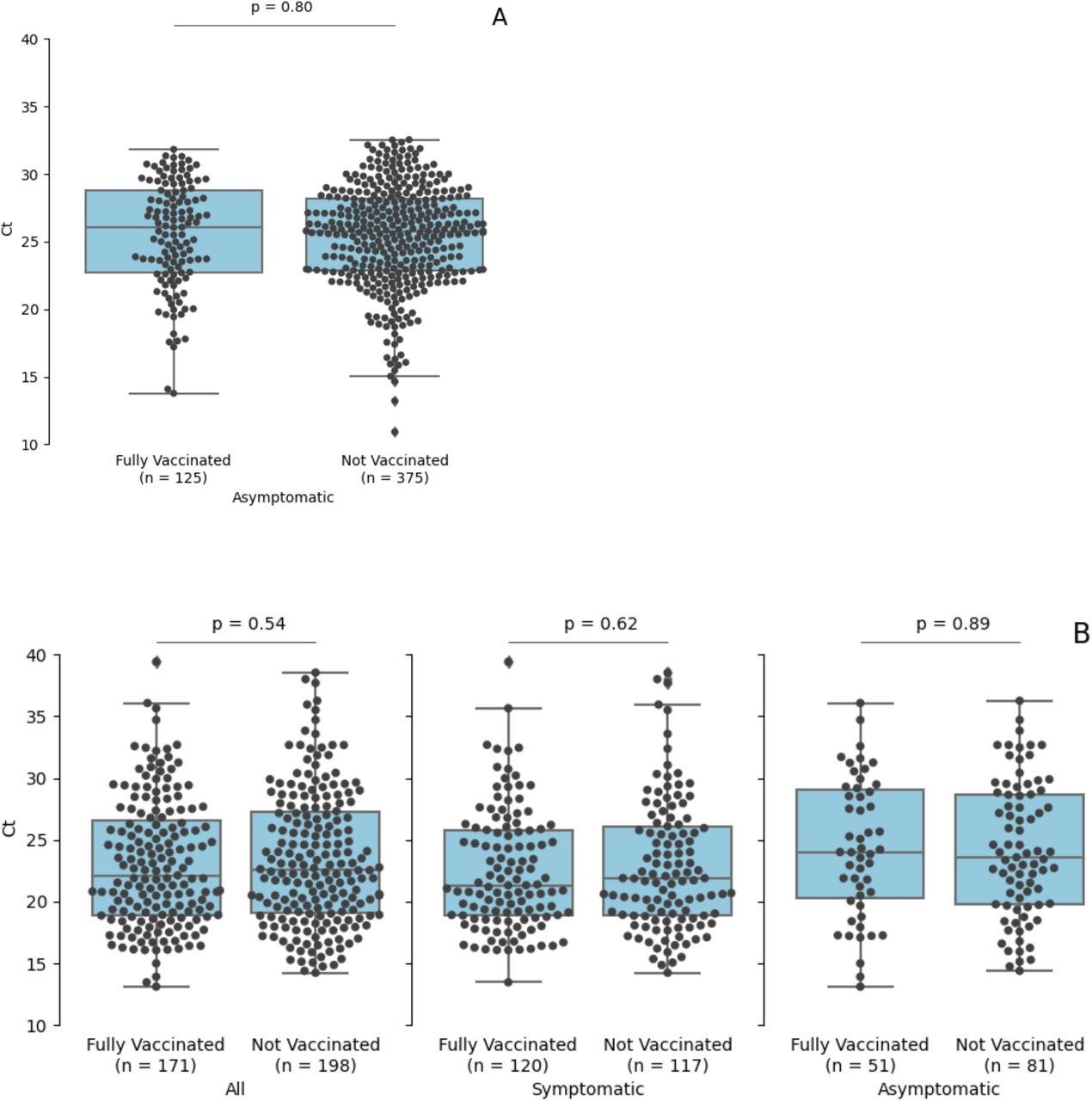 A quote from the article is reproduced here:

It should be underlined that low Ct values are not proof of infectiousness and these studies are not conclusive. However it is hard to refute both this evidence and the general trend in cases in vaccinated countries. Without performing properly controlled trials it is not possible to prove conclusively that vaccination alters transmission.

The European Union’s Covid-19 certificate (so-called vaccine passports) system was introduced in July 2021 for travel purposes. On July 26th Ireland began using vaccine certs for indoor dining, restaurants and pubs. Though due to be dropped on October 22nd, they have been extended into next year and their use has gradually expanded to other areas like theatres, cinemas and even sporting activities for young people. The story is similar in other countries, each having their own arbitrary version of the policy, seemingly dependant only on the whims of each government. The policies are apparently designed to limit mixing of unvaccinated people with others in public spaces. But since transmission rates are very probably similar in both groups it is hard to see the public health argument for such mandates. There are no visible benefits and the harms to individuals on the wrong side of such rules are self evident.

It should be emphasised that the virus is now moving into the endemic phase. Any measures introduced to control or mediate the spread of such a virus can have a detrimental impact on society with little return. They must be carefully evidence-based, fair and proportional. The current vaccine passport approach surely violates those principles as laid down in the governments own framework document.